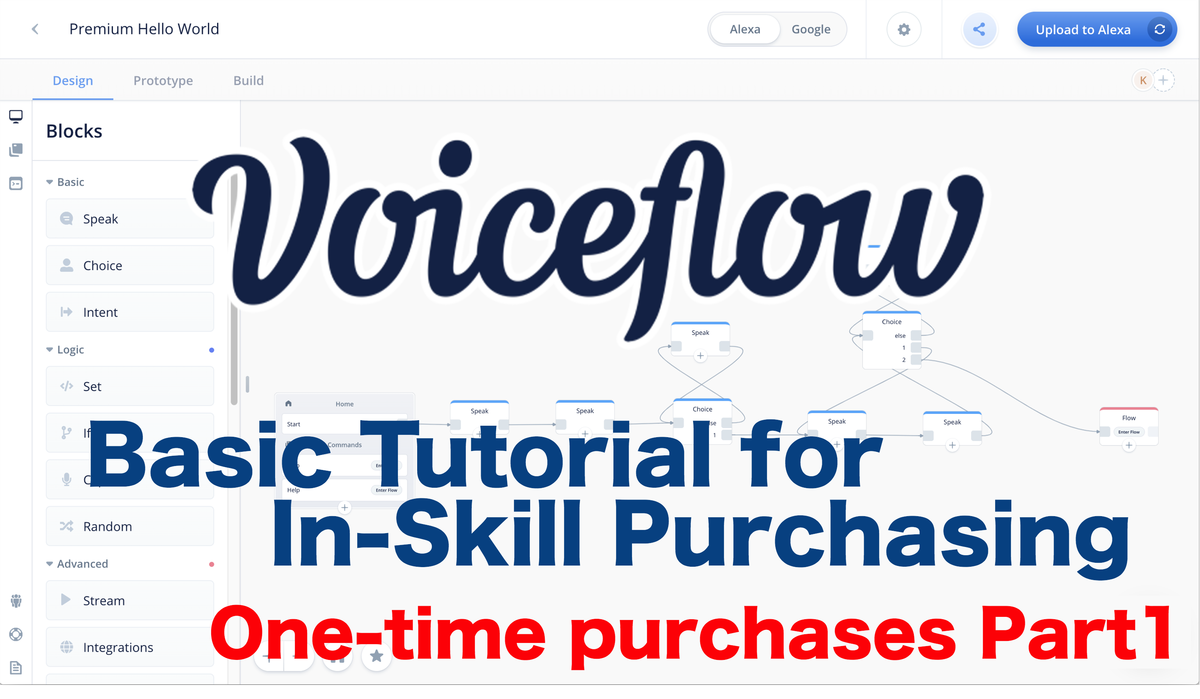 NOTICE: For Voiceflow's biggest UI updates, I will revise all this tutorial. So stay tuned!

Hi, I've createed a basic tutorial for how to create an in-skill purchasing skill using Voiceflow. This tutorial will consist of 2 or 3 parts, and this is part1 today.

In this tutorial, we will create a sample skill with ISP feature step-by-step. This sample skill is based on Amazon's official ISP sample, which is available on Github. So, you can try coding too if you are interested with it.

Here are some notes.

We will create a skill named "Premium Hello World". This is a very simple skill.

Let's start with creating a new project called "Premium Hello World". For this time, we choose "English(US)" for US skills. If you are living outside of the U.S., you can choose other locales based on where you live and also you can translate all the speech texts in your language.

For ISP, we will need to create various features such as basic, premium, buying, upselling, cancelling, etc... First of all, Let's start with basic flow and add each feature step by step.

Welcome to Premium Hello World, you can say hello! How can I help?

Sounds very simple and easy, right? OK, now we will start to create this flow.

Type speech texts in each speak block, like these.

Next, we put choice block and create an Intent named "basic_hello_intent". 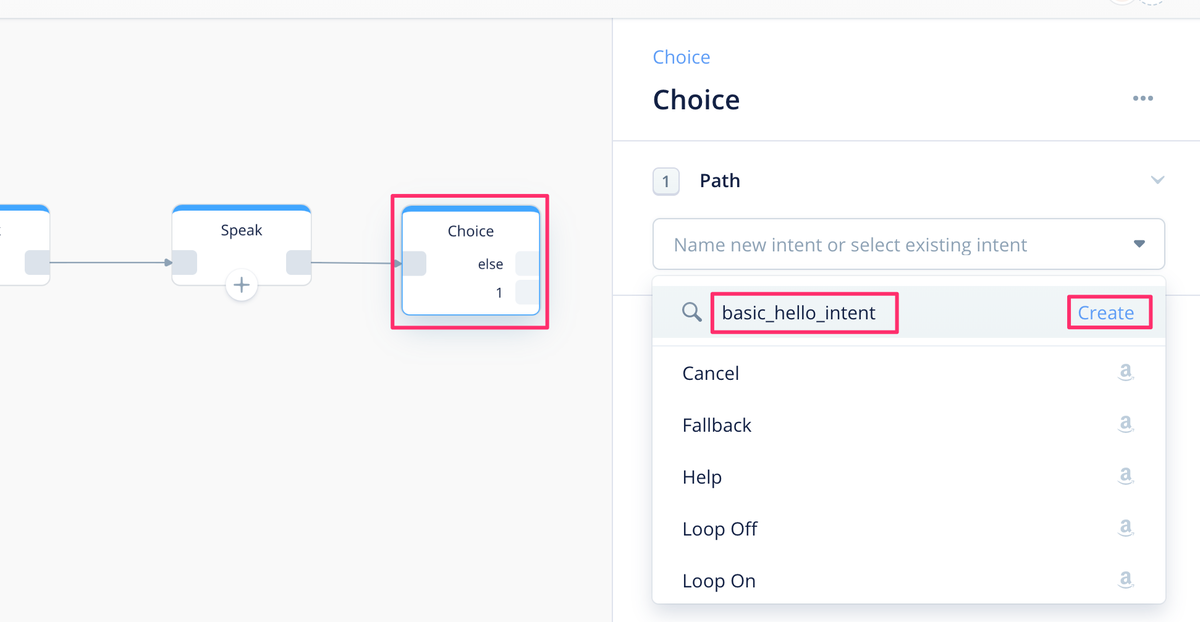 Add an utterance "Hello" for this intent. Then, users will go to basic_hello_intent when users say "Hello". 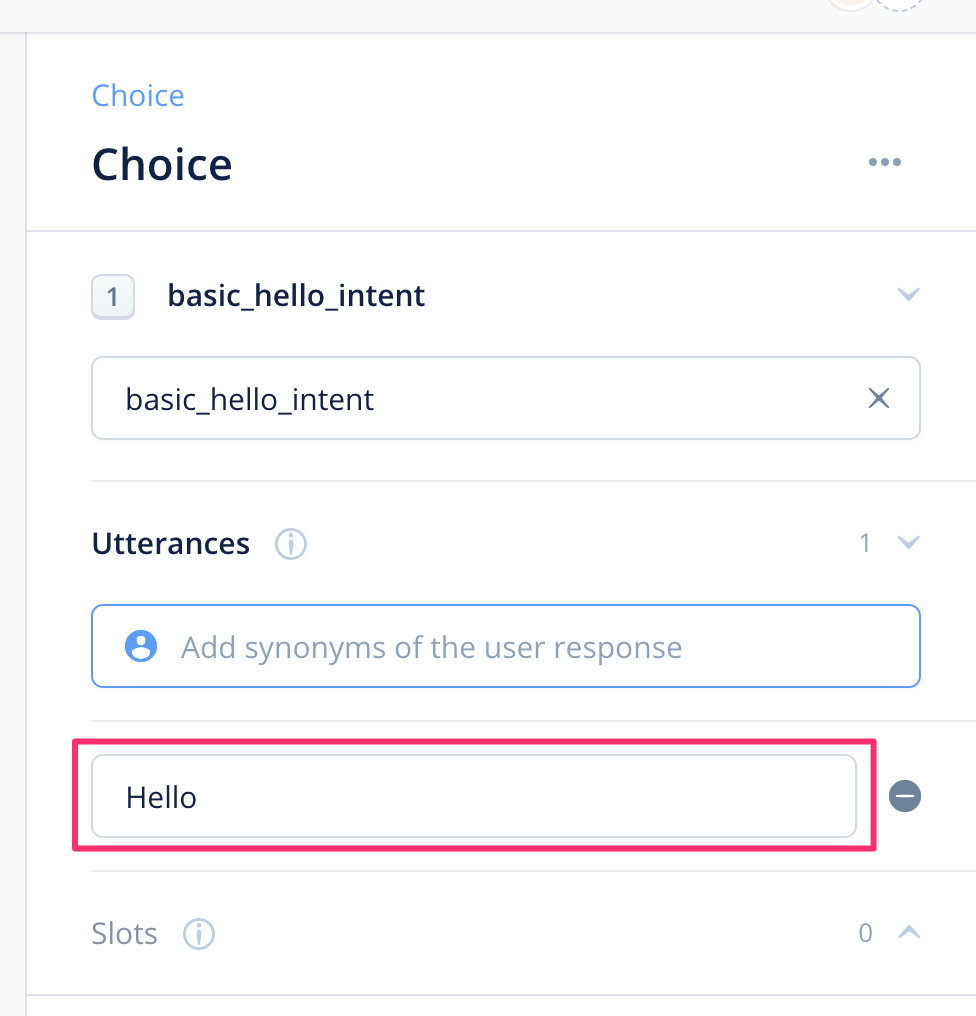 Also, when users say other than "Hello", users will go to Else path. This means users say something what we don't expect. So put a speak block for urge users to say again something we expect and return to choice block.

After users say "Hello", then it's Alexa's turn. As I mentioned in the conversation dialog sample above, Alexa will say not only "Hello", but also "Howdy!". We can do this randomly by enabling "randomize outputs" option in speak block.

Put a speak block after choice block and type "Hello!" in speak block. Then click on "system" below.

A new speech text field should be added under "Hello", so type "Howdy!" and click ellipsis icon at the bottom. 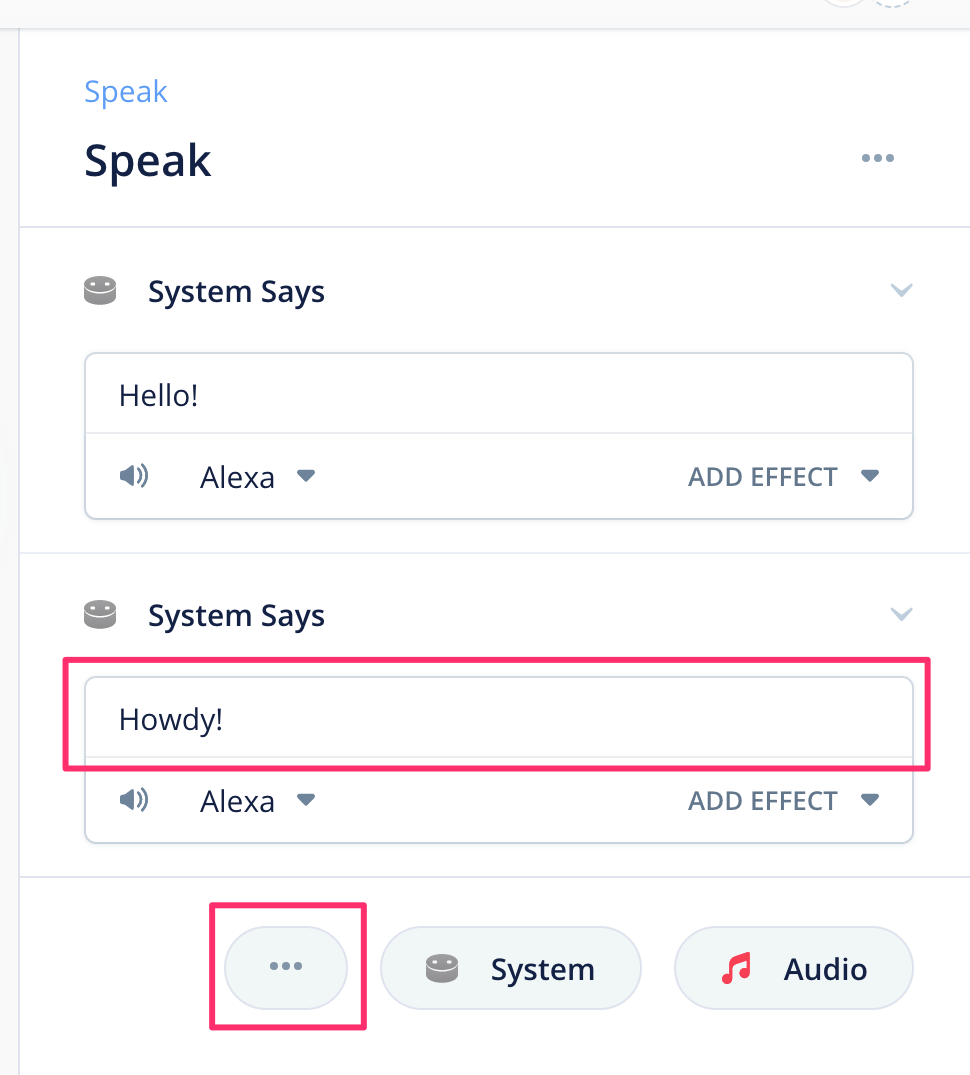 We will see small icons at very right of each "System says". Now Alexa will say one of speech texts randomly. 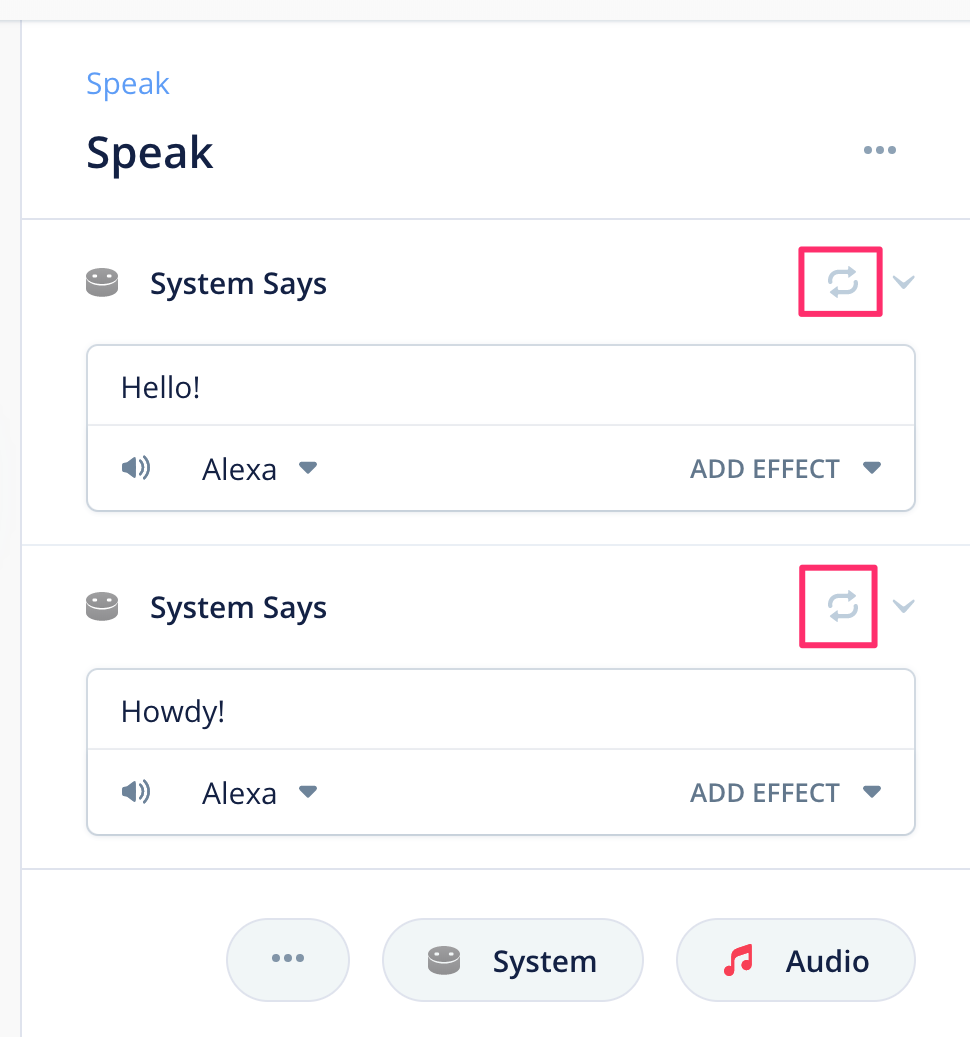 We can add more speech texts by clicking on "System" icon. Also, if you want to disable randomize, click ellipsis icon again and click "Unrandomize outputs". In this tutorial, we will go "randomize" because it will be more like human! 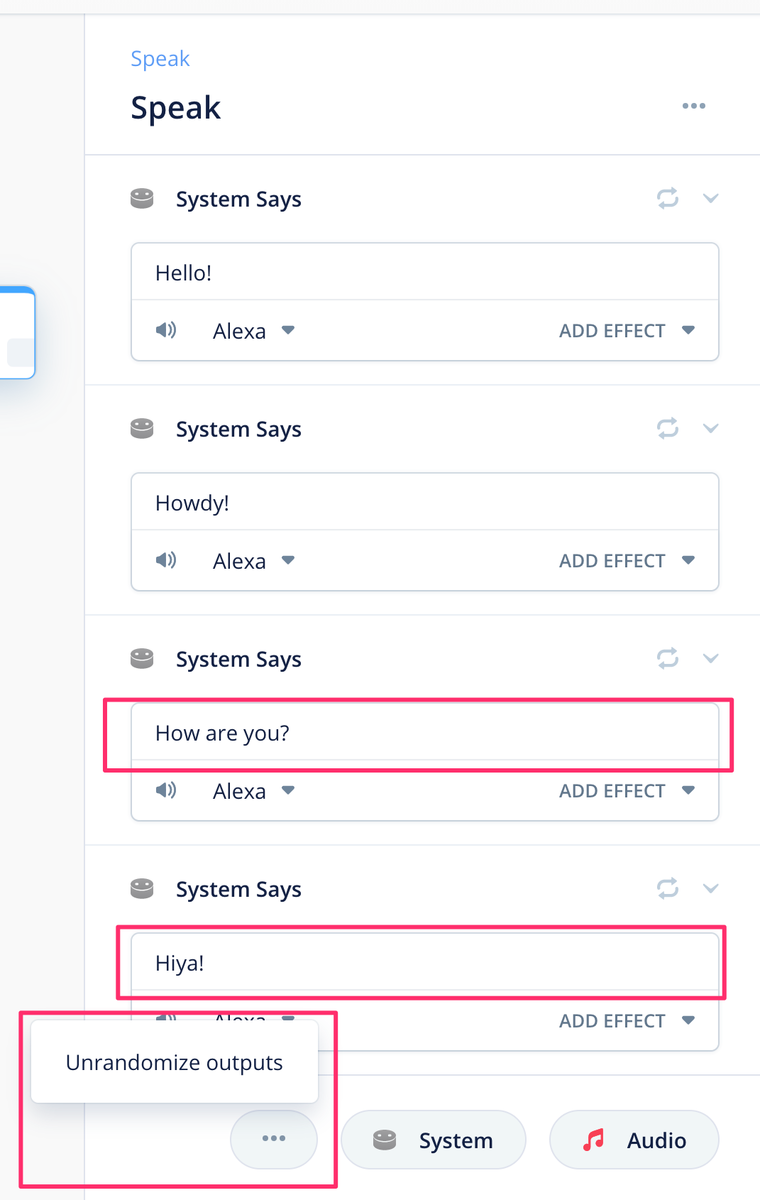 After Alexa says, we will ask users to say again or not. Put speak block and type like these. We use randomize here again. 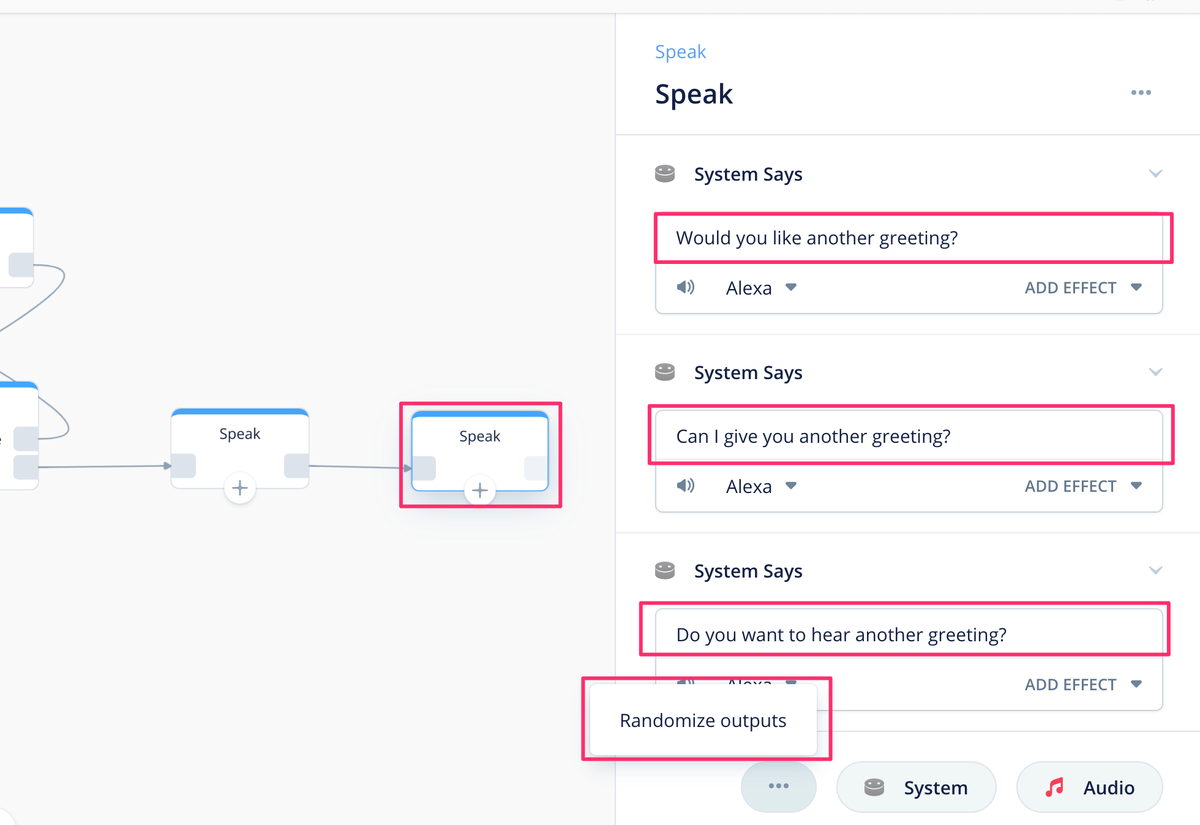 Put choice block to capture users' answer, "Yes" or "No". For Yes or No, we can use built-in YesIntent and NoIntent. It's so easy that we don't need add any utterances and also recognition for built-in intents is very accurate. 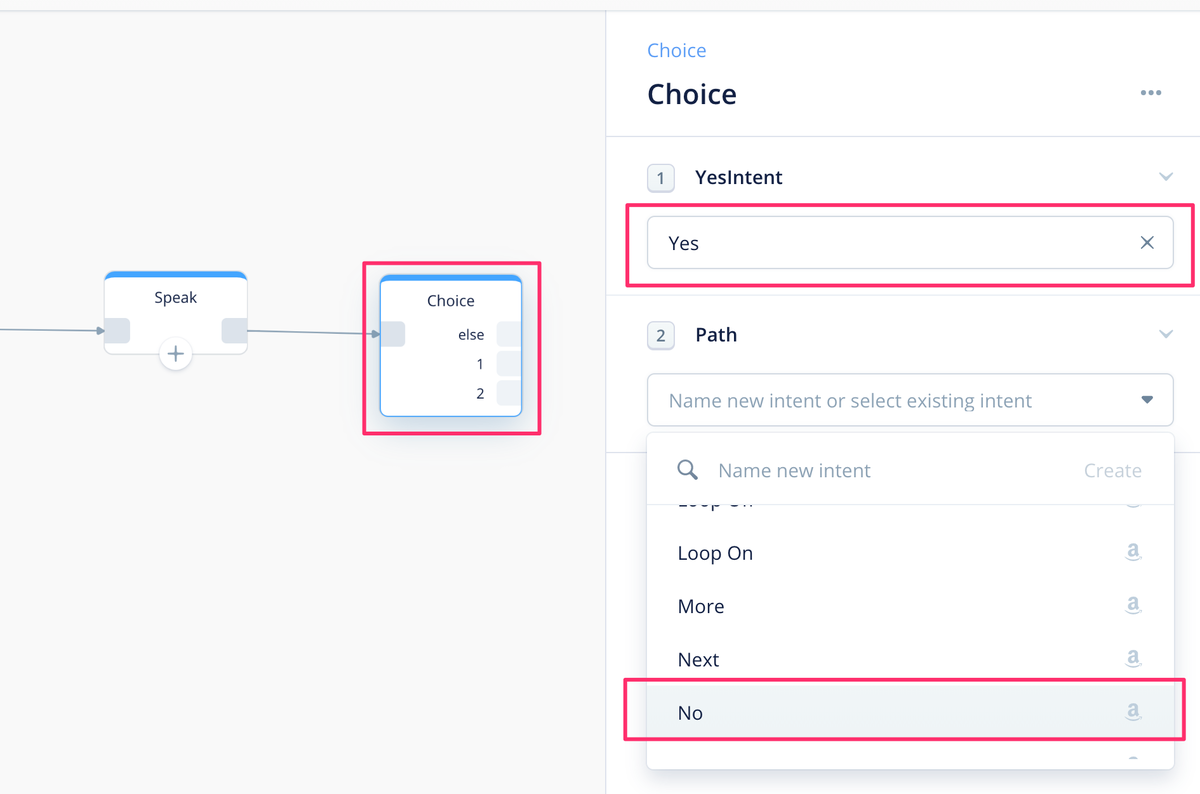 If users say "No", skill will end, so put a flow block and select "Stop". Stop flow is a Voiceflow's built-in and It will be and should be called anywhere in the skill when users say "Stop", but like this, you can use this as exit block at the end of flow.

Click on "Enter Flow", then will go to inside of Stop flow.

We are now the inside of Stop flow and there are speak block and exit block combined into one block. So Alexa will say something and this skill will end. 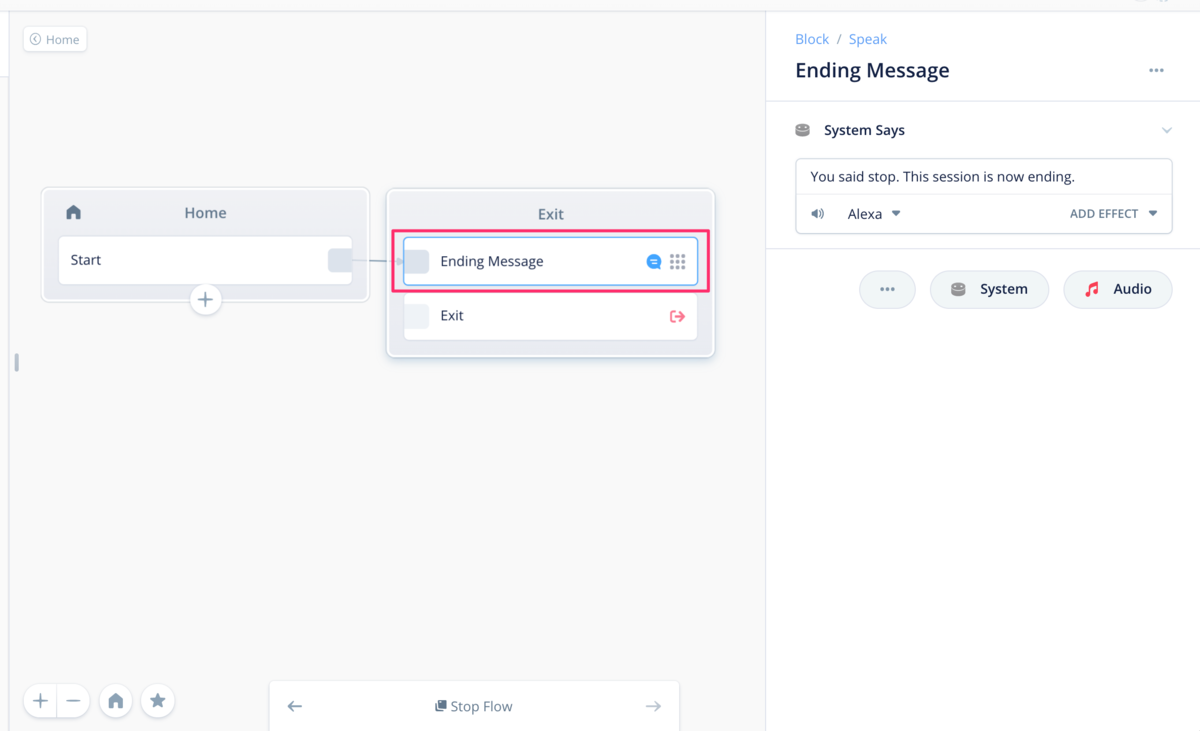 Change Alexa's speech text in speak block like this and randomize here too. I love randomize! 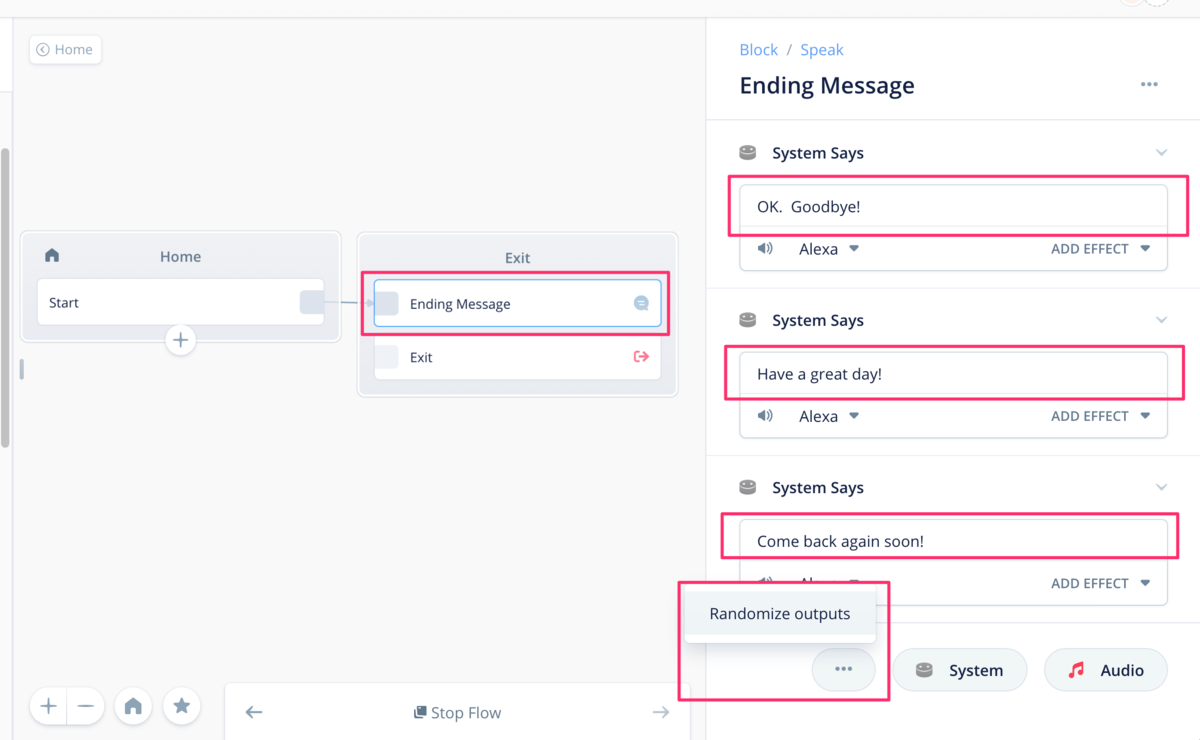 Click on home at upper left of canvas and go back to the main flow. 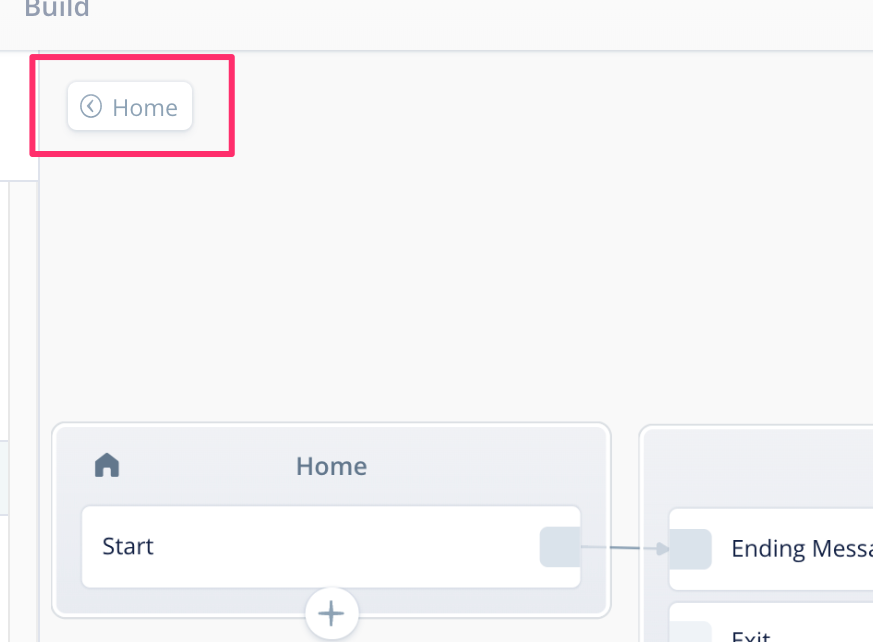 Next, if user say "Yes", Alexa will say "Hello" again, so connect "Yes" choice of choice block back to speak block which say randomized "Hello". 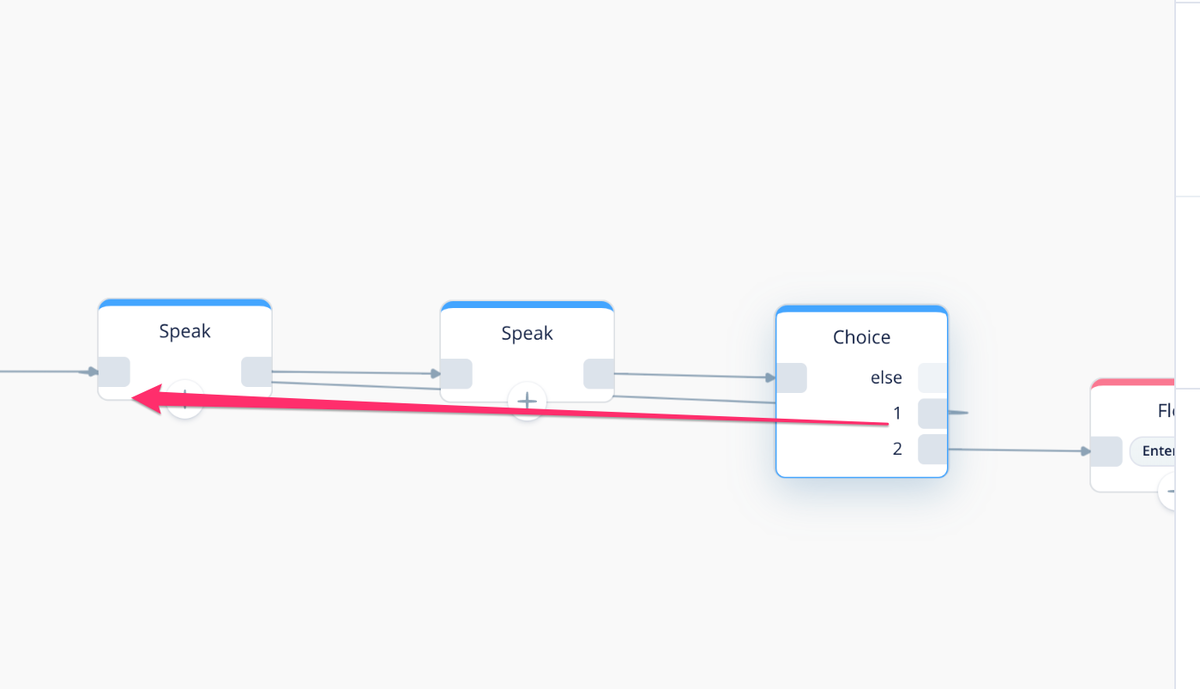 This is somehow unclear. We can arrange the layout of choice block like this. 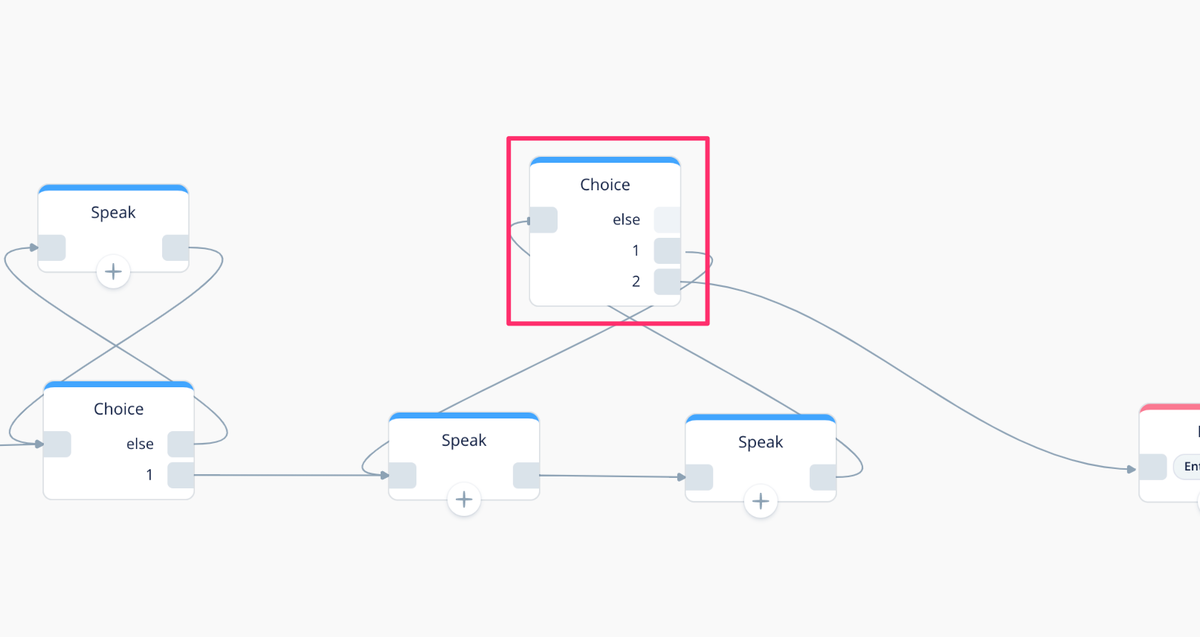 It's another time we use 8-shaped looping for choice block. When users say something other than "Yes" or "No", it will go to else. So, we should put another speak block and connect using 8-shaped looping. Speech text in that speak block will be like below. 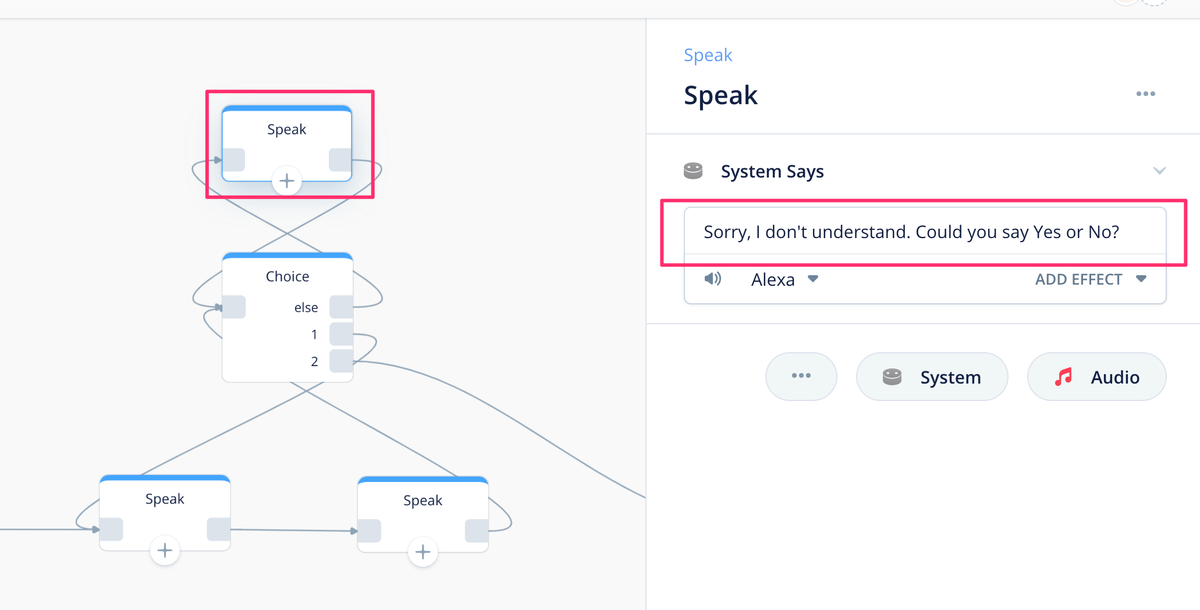 Finally, we've done basic feature for this skill!!! This is the entire flow now. 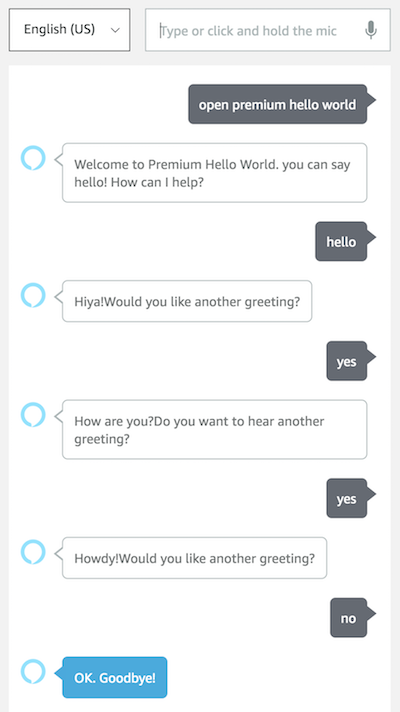 Next time, we will add some features for ISP:

Will continue to Part2.